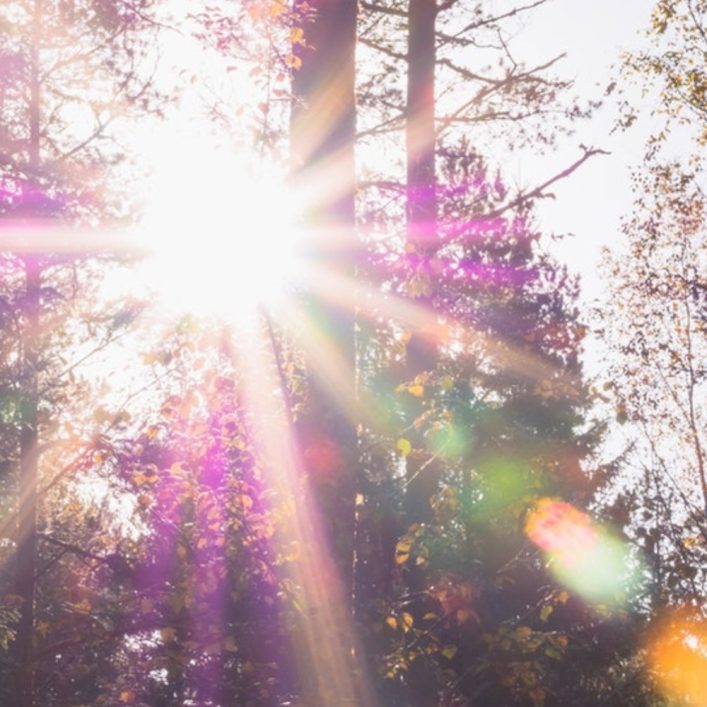 Until fairly recently, you could divide the world’s thinking on this subject into roughly two dominating positions:

Very often, the West, with its emphasis on rational scientific thought, has completely divorced the realm of the supernatural/spiritual from that of the material world. Now of course, things are changing rapidly. There is massive interest in the supernatural/spiritual and how it affects the physical. We are living at a time when science seems to be demonstrating repeatedly how little we really do know about our universe – whether Quantum physics or DNA genetic codes.

Are there paranormal powers and agencies of which science has so far failed to take into account?

As Christians, what is our explanation to be?

How are Christians to explain the experiences that many people apparently have? How can we think clearly about a subject that is frequently complex, baffling and very contradictory?  Do we have to disbelieve everything we are told? Should we believe anything?

Here are 9 possible explanations of alleged paranormal events that we can use to inform our thinking when we hear of such incidents.

We’ve all seen magicians who seem to make things disappear before our very eyes. Some of these tricks are quite amazing and even make us gasp. The magician David Copperfield made the Statue of Liberty disappear before a large audience. The audience could not explain it, it looked like a supernatural event and part of Copperfield’s act is pretending to conjure up spiritual powers. Nevertheless, he admits, and everyone knows, that it is only a trick of the eye.

Of course, there are many charlatans around who will pretend to have paranormal powers, and deceive people into believing when really they are only performing clever tricks.

Some paranormal phenomena are nothing but trickery performed by entertainers or charlatans deceiving the gullible.

When a theory is attractive, people are often careless about the facts and as the story is passed on it can get exaggerated. We even have a phrase today – ‘urban myth’ – to describe this tendency. In 1915 Arthur Machen wrote a story, ‘entirely without foundation’, about angel troops who had rescued British soldiers in the retreat from Mons. To his horror, the story was accepted as true and several ‘witnesses’ of the angels came forward. The legend still lingers today! I myself have heard this story used in talks.

When it suits their wishes, people are often prone to believe what appears to happen rather than the reality behind the appearance. There are many so-called ‘faith-healers’ who make claim to hundreds of miracles which turn out to be nothing more than exaggerations and false claims when they are investigated.

Some paranormal phenomena are nothing but enthusiastically inaccurate reporting.

I was once in Disney World and experienced a show called ‘Alien Encounter’. We were given the suggestion that a horrible alien monster had escaped inside the building. Then the lights went out. What followed was a series of sounds and sensations – the growling sound of a hungry beast relayed through hidden speakers placed just behind each member of the audience; a jet of air blown down our necks as if the monster were breathing on us. Even though I had worked out the mechanics of it all, the experience was still quite scary, because of the power of auto-suggestion.

The ‘placebo effect’ is another well-documented example of auto-suggestion. People are given pills but are not told that they contain no drugs. Yet they still report an improvement in their symptoms after taking them.

Some paranormal phenomena are nothing but auto-suggestion.

It is now known that humans use very little of the brain’s full potential. In fact, we know very little about the workings of the brain. Some autistic people have incredible abilities that we could never imagine learning ourselves and which defy explanation. I remember seeing a TV programme about an autistic boy who was shown a picture of the British Houses of Parliament for just 5 minutes. He was then able to go away and draw a picture of it with all the proportions and the hundreds of doors, windows, towers and statues exactly right.

Geniuses and prodigies show that perhaps most of us are only able to use a very small proportion of the powers of our natural faculties. Maybe sometimes, and for some unknown reason, we are able to tap into parts of the brain that we really know nothing about.

There are times when our bodies produce all kinds of chemical eruptions or even shutdowns. These are often at times of deep stress, pain, fear or joy and excitement.

Dr. Sue Blackmore, a senior lecturer in psychology at the University of Western England, Bristol, believes that the common version of the near-death experience – moving along a tunnel towards a bright light – is due to nothing more than a lack of oxygen to the brain. She says that the visual system is organised in such a way that there are many more cells devoted to the centre than to the periphery of the visual field. A lack of oxygen will cause random activity throughout the visual system. “What will that look like?” she asks. “Lots of bright lights flashing in the middle where there are a lot of cells, fading out towards fewer at the outside – which will look like a bright light at the end of the tunnel. As the oxygen falls away, and the brain activity goes up and up, so this bright bit in the middle will get bigger and bigger, and you will get this effect of rushing through a tunnel towards a bright light. It will seem perfectly real, because it is real….”

Other explanations for near-death experiences include hallucination induced by pain or drugs, leftover memories from the experience of birth, or the brain’s reactions to altered levels of carbon dioxide.

This is that experience of feeling that we have been in a certain place or done a certain thing before. This is often put forward as an evidence of reincarnation. But an alternative explanation is that it is caused by a functioning of the two halves of the brain out of rhythm with each other. In other words, one side of the brain has processed what we are seeing a split second before the other half has.

Some paranormal phenomena are due to nothing more than some kind of bio-chemical storm.

6. Rhythms and Patterns of a Complex Universe.

There are lots of rhythms and patterns that undoubtedly affect the world and us living in it.

Many people think that there are invisible lines that go around the earth called ‘ley lines’. And some believe that these ley lines seem to be some form of change in the earth’s magnetic field. It is possible that birds, fish and animals use these lines as direction-finders.

In a ‘New Scientist’ article (19.3.87 pp 40-43), T. Williamson points out that species as diverse as pigeons, whales, honeybees and bacteria can navigate using the earth’s magnetic field. The physiological feature which enables them to do this is a tissue containing a substance called ‘magnetite’. Magnetite enables them to sense magnetic changes and has been found in human tissue associated with the ethmoid bone in front of the vertebrate skull.

Seasonal Affective Disorder is a winter affliction caused by sun and daylight starvation. For centuries doctors have been aware of changes in mood and energy levels which can occur in winter, but they used to blame the ‘winter blues’ on the cold. Now they know that it is due to a lack of light which has an effect on the brain.

The word ‘lunatic’ derives from the word ‘lunar’ for moon. People once thought, and some still do, that the movements of the moon not only affect the tides of the sea, but also human behaviour.

Some paranormal phenomena can be explained by long-ignored patterns and rhythms built into God’s good creation. And the more of these we discover the better.

The Bible leaves us in no doubt that there is a devil and demonic powers affecting our world. The big thing the devil does among us is to perpetrate lies. Jesus calls him the ‘father of lies’: deceit, falsehoods, and misleading people is his business.

The human quest for power without ethics – the ability to know and control without having to change ourselves or submit to God – is one that the demons love to exploit. If performing a few tricks will distract us from coming to terms with our sin and our need to be reconciled to God, then demons will gladly oblige. Likewise, if people want power without reference to God, encouraging pre-occupation with paranormal phenomena rather than with the truth about God is a favourite tactic of the devil.

Ultimately the devil’s lies and deceiving tactics are about leading us away from the God of truth. So he will use paranormal experiences to take up our time and interest so that we fail to listen to God’s word, the Bible, where we can find how God explains the world.

In the Bible book of Acts 16:16-19 there is the story of a fortune-telling slave girl, from whom a demon is cast out. If the girl’s powers were innate and merely natural, why would she lose them at the very moment of the exorcism? It would seem here that psychic fortune-telling powers came from the spirit and not the girl.

2 Thessalonians 2:9-10 in the Bible tells us that “the coming of the lawless one will be in accordance with the work of Satan displayed in all kinds of counterfeit miracles, signs and wonders and in every sort of evil that deceives those who perishing.”

Demons may imitate the dead for two reasons:

Some paranormal phenomena are to be explained as the deliberately misleading activity of evil spiritual beings.

Of course, the explanation may well be a mixture of any of the above.

Undoubtedly, God has the right to break the natural laws of the universe because those laws came from Him in the first place. The miracles of Jesus were extraordinary events that were clearly meant to be sign-posts, pointing to who Jesus is.

One reason behind so much of the fascination with the paranormal is the desire for power without ethics. After all, that’s what magic is – power through technique, manipulation or meditation. Not power to change us morally, but power to get what we want. So people are fascinated by secret powers that could take them to new personal highs. What excites us is power through knowing the future, transcending the body and exercising mind-control over others.

The correct Christian attitude to these things is not to deny the reality of them, but to insist that being preoccupied with them will lead us to miss out on truth. The answer to ‘people problems’ is not the experience of some phenomenon or power to help us face the future. Instead we need to own up to our guilt before God, which has caused our alienation from Him. God’s answer was to reveal Himself to us in Jesus, the one who took our guilt when He hung on the cross. Our great opportunity to find true life is not in dabbling with the paranormal, but in being reconciled to our Maker and in coming to know Him as our Father. How? By trusting in his Son – Jesus.