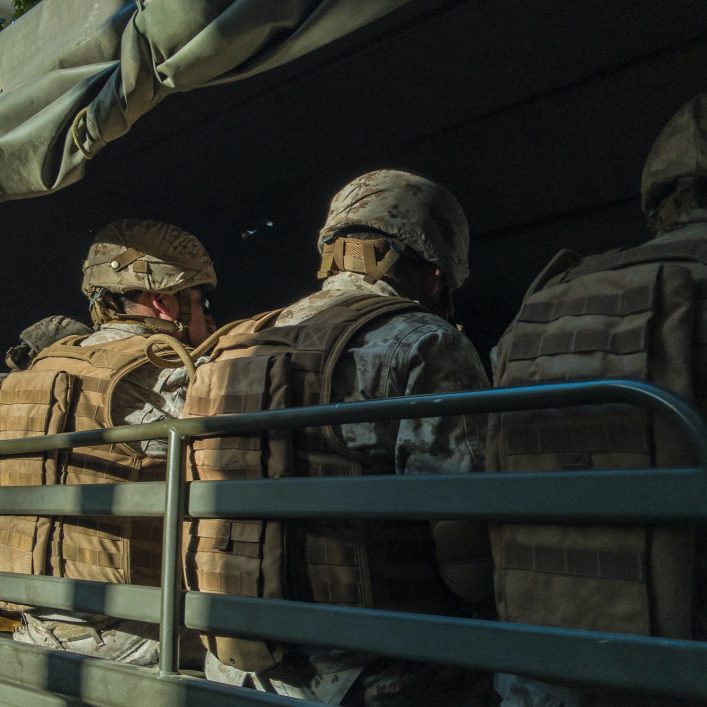 Many people who attend Cornerstone Church Kingston have wonderfully interesting life-stories to tell. Today we meet Greg, who discovered his greatest fear while serving in the Canadian Territorial Army.

I had been living a pleasant and untested life, guided by a vague understanding of who I was and of what I thought was right and wrong.
The realisation that I had no considered basis for any of my ideas about God, the world and how I should live, came as a sudden epiphany.

I had heard about who God is a lot during my life, growing up, but somehow, I hadn’t managed to grasp him. Many in my family were Christians including my mum, who insisted I go to church until I was old enough to choose for myself. Yet the idea that Christianity was anything more than a bunch of draconian rules to make people behave nicely had never cut through to me.

My early experience of church was not a positive one. I never felt at home in church. I always seemed to be on the ‘wrong side of right’ no matter how hard I tried, and I was treated badly on enough occasions to believe that the congregation never truly saw me as one of them. Failing (or perhaps unwilling) to separate these fallible ‘messengers’ from the infallible ‘message’, I resorted to the defence of walling myself off to both.

At the age of independence, I was already in the Canadian Territorial Army. There I discovered talents and a camaraderie that encouraged me to pursue a military vocation throughout my twenties. I readily threw myself into it, together with the hedonistic lifestyle that followed. My drift from God had been accomplished without even the faintest consideration.

Yet in a single moment my blissful indifference was shattered.

Not on a battle-scarred highway in Afghanistan. Not in a lost relationship. Or through failing health. No. It was on a mundane winter’s night while drifting off to sleep.

There, not quite awake and not quite asleep, the thought occurred to me: “What happens to my consciousness when I die?”

At that moment I felt as if the bed opened up and plunged me into an icy bath. I shot straight up, a terrifying coldness pulsed through my veins, and my stomach twisted into knots.
Annihilation? Nothingness? Just gone, as if I had never been?

I had known vulnerability in my life, but nothing like this. From growing up in a place that was a byword for brokenness and violence, to patrolling some of the world’s most dangerous roads, I had never felt a lack of courage to deal with danger. But this time I froze, psychologically paralysed, barely able to eat or sleep.

This newfound existential awareness haunted me for weeks.
Are we only physical beings? Are truth and justice just products of human endeavour that serve to distract us from the utter banality of our daily struggles? Do they ultimately get tossed into the abyss, along with the minds that created them?
Or are truth and justice transcendent realities that point us to something more?

Desperate for relief, I mustered the courage to look for answers. I was rational and ruthless, seeing no point in clinging to some mystical feel-good story, like a child with a comfort blanket. The only thing worse than being ignominiously chucked into oblivion would be to base one’s life on a delusion and wind up there anyway.

What surprised me was how abundant the answers came and how quickly they pointed me back to Christianity. I was shocked at the mirth with which many Christian thinkers greeted the fiercest of sceptics, atheists, and people from other faiths. Harsh intellectual questioning about issues such as the origins of the universe, the nature of truth and its knowableness, and the reliability of the Bible – such an onslaught had occurred for two thousand years and yet the truth remained like steel, becoming harder and harder against every blow.

As arduous as my intellectual journey was, I found the relational aspect even harder.

It was one thing to know that He, Jesus Christ, was out there; it was an entirely different thing to actually know Him.

So I took a leap of faith and gave my life to Him, asking Him to reconcile me to Him; promising to do things His way instead of mine; giving priority to what He says over a very fallen and needy world.

And I found Him, right where He said He’d be. On the other side of that wall I had built.

Breaking out of my self-constructed cell was the most important event of my life.