Mary – A.K.A the miracle mother 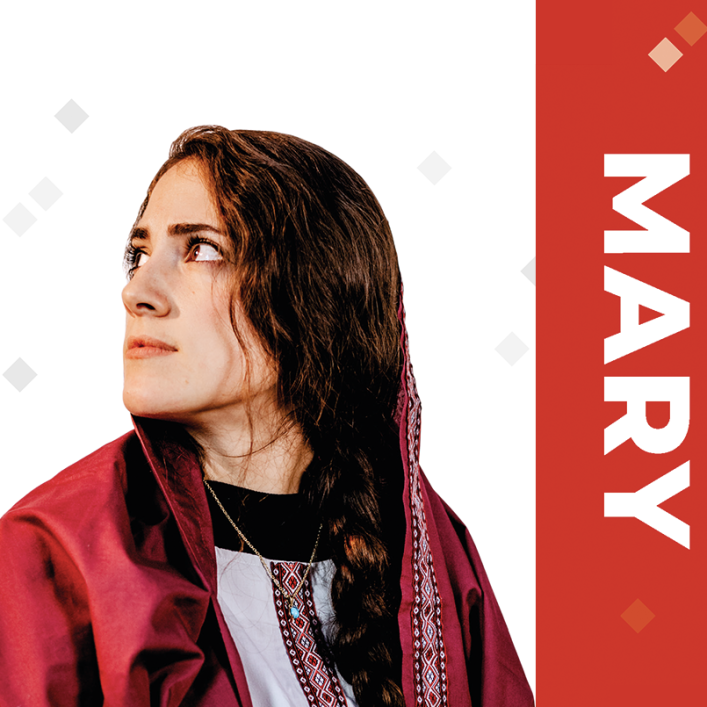 Here was Mary, probably in her teens, looking forward to her marriage to Joseph – and now all her plans were to be interrupted by the plans that God had for her. Miraculous interventions don’t always make life easy. Clearly, Mary’s pregnancy was going to be misunderstood, and she would have to face the ‘wagging of tongues’ in her hometown of Nazareth.  Even her beloved Joseph didn’t understand at first, and only came to accept that this was God’s plan after the visit of an angel.

Although Mary didn’t understand how she could be pregnant, this young teenage girl seemed to have had a good grasp of Israel’s scriptures. Her character, her worldview, and her understanding of both history and future events were all shaped by God’s word, and that is why she could say, “I am the Lord’s servant.”

If you read Mary’s song in Luke’s Gospel chapter 1, you can see just how well she understood God’s plan revealed in the scriptures. In her song she calls God ‘the Lord’, ‘God my Saviour’ and ‘the Mighty One’, and then goes on to sing about God’s holiness, mercy and power, and the fact that he keeps his promises to those who ‘fear him’.

Later, of course Mary had to endure the pain of seeing her son suffer and die on the cross. In fact, even when Jesus was only a tiny baby, a man called Simeon predicted that a sword would pierce Mary’s soul because of Jesus. And that is what happened when Jesus died on a cross.

Mary’s last recorded words in the Bible are “Do whatever he [Jesus] tells you.”

And the last time Mary is mentioned in the Bible, she is at a prayer meeting.

The angel said to her, “Do not be afraid, Mary; you have found favor with God. You will conceive and give birth to a son, and you are to call him Jesus. He will be great and will be called the Son of the Most High. The Lord God will give him the throne of his father David, and he will reign over Jacob’s descendants forever; his kingdom will never end.”

“How will this be,” Mary asked the angel, “since I am a virgin?”

The angel answered, “The Holy Spirit will come on you, and the power of the Most High will overshadow you. So the holy one to be born will be called the Son of God. Even Elizabeth your relative is going to have a child in her old age, and she who was said to be unable to conceive is in her sixth month. For no word from God will ever fail.”

“I am the Lord’s servant,” Mary answered. “May your word to me be fulfilled.” Then the angel left her.

We might have many plans for our life, but God could well have different plans. These can even bring us pain, but they will also bring blessings to others.

The phrase ‘virgin birth’ refers to the miraculous event at the heart of the first Christmas. It tells us that when Jesus came into the world, he had a human birth mother but no human father. According to the law, Joseph was his adoptive father, but he had no part in the conception of Jesus in Mary’s womb.

There is a mystery about the virgin conception – and that shouldn’t surprise us. We are told that the Holy Spirit ‘overshadowed’ Mary, causing her body to conceive the Son of God so that he would be born as a human.

Why is the virgin birth so important to the Christian message?

Jesus is the Son of God: therefore, he existed before the creation of the universe and before his mother Mary. The angel Gabriel told Mary that “the holy one to be born will be called the son of God’.

The virgin birth declares that Jesus is the God-man. Therefore, he is the only one who can bring reconciliation between God and people. But more than that: he is the one who was able to die in the place of people – he was the perfect sacrifice. He is fully human and therefore can represent and stand in the place of humans; and yet he is without sin. Therefore, he can take, in our place, the punishment from God that our sins deserve.

Isaiah chapter 9, verse 6 says, ‘For to us a child is born [declaring the humanity of Jesus], to us a son is given [announcing the Son of God].’ Jesus himself taught that he ‘came down from heaven’ and was ‘sent by the Father’.